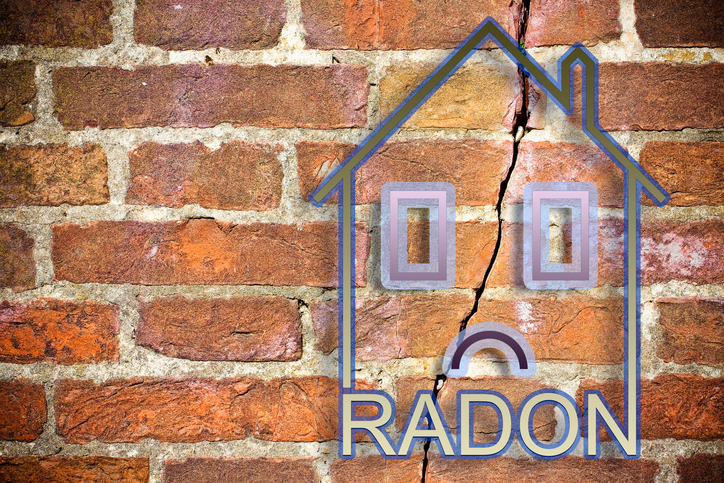 Radon is the second-leading cause of lung cancer in the U.S after cigarette smoking, according to the United States Environmental Protection Agency (EPA). Radon-associated cancer costs more than $2 billion a year in medical costs. People who smoke cigarettes and are exposed to radon inside their homes are at an especially high risk of lung cancer.

Radon is a naturally-occurring invisible radioactive gas that is present in many homes. In fact, nearly 1 out of every 3 homes checked in seven states by the EPA had levels of radon that were higher than the acceptable levels of 4 p/Ci/L. Radon is produced by the breakdown of uranium in rock, soil and water. Because the air pressure inside a home is lower than the pressure of the surrounding soil around a home’s foundation, the home acts as a vacuum, pulling radon inside the home through cracks in the foundation and other areas.

The EPA and the Surgeon General recommend testing for radon in homes. They also recommend reducing levels of radon in homes. Even homes that have less than the acceptable level still pose a risk. The EPA says that any radon exposure presents a risk of lung cancer.

Why Aren’t Passive Radon Systems As Effective As Active Systems?

Passive radon systems usually employ a PVC pipe that is sealed into the gravel layer underneath the basement slab. They are also sometimes sealed into a sump cover that runs from the basement through the home to the roof where they vent. Passive systems are based on the thermal stack effect. This effect causes the house to act as a vacuum on the soil. The problem is that the strength of the radon coming from the ground is usually stronger than the passive radon system.

Radon is heavier than air. This means that the gas will not usually go up through the vent pipe. To draw radon out of your home, the radon must vent outside the home.

How Do I Know If My Passive Radon System Is Working?

The only way to know if your passive radon system is working is to test for radon gas inside your home. The EPA recommends regular radon testing for all homes below the third level.

How to Eliminate Radon?

High radon levels can be reduced. The EPA recommends working with a radon-reduction mitigation contractor, such as RDS Environmental, to mitigating radon if you have high levels of this radioactive gas in your home.  An active radon system is much more effective at reducing levels of radon in the home than a passive system. RDS Environmental can help you choose the best system to ensure that your home environment is healthy and safe for you and your family.