We are Colorado’s oldest Radon Testing and Mitigation Contractor. 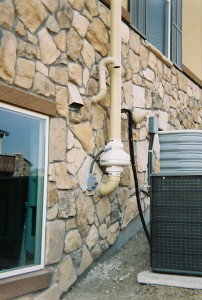 A properly installed radon mitigation system can reduce your radon levels as much as 99%, providing you with a safe and healthy home environment.

Contact us today 303.444.5253 to request a Free Estimate for the install of a radon Mitigation System.

Today modern construction that conserves energy by making homes air tight exacerbates the risks of radon exposure if radon is present in the home.

The most common method of radon mitigation is known as an Active Soil Depressurization (ASD) system.

An ASD Radon Mitigation System utilizes PVC piping attached to an in-line radon fan. The piping typically begins below the lowest floor of the structure’s foundation (penetrating the slab of the basement or the plastic membrane of the crawl space) and extends upward to an exit point above ground level. The radon fan is mounted in an inconspicuous location on the exterior or within an attic or a garage in the home. In cases where the radon fan is installed in the attic, the discharge pipe extends out through the roof so the radon gas can be released outdoors. Once radon is released into the atmosphere, it is no longer hazardous as it is diluted by the outdoor air. Radon is only dangerous when trapped indoors.

Our mitigation professionals can typically install a radon mitigation system in your home in less than a day.

We are a NEHA certified radon mitigation installer, fully licensed and insured.

After the system is installed, the radon levels begin to drop almost immediately. Passive radon reduction methods (such as sealing cracks or installing pipes without inline radon fans) are rarely effective at reducing radon levels. The reason that these “passive” radon reduction methods are ineffective is because radon gas is under pressure and must escape from the ground. It is a very inert, un-reactive gas that can be drawn up through the cracks pours of concrete, around drains, utility penetrations, or expansion joints. Attempting to “seal out” radon is similar to trying to keep water out of a basement by painting the walls and floor with waterproofing paint. It may work temporarily if the problem is minor, but it wouldn’t keep standing water out. The only way to fix a water problem is to redirect the water somewhere else before it enters the home. The same principles apply to radon reduction. Sealing cracks and openings is part of the radon mitigation process; however this is to prevent the downward draw of conditioned air from the home and to improve the pressure field extension of the system below the slab, not to “seal out” the radon.