Now we told ourselves we wouldn’t watch the Superbowl due to the fact our beloved Broncos would not be staring in it,  but if you couldn’t resist you probably turned on the T.V. and found that the Big game on Sunday was the last big breath of the NFL season.  Now NFL fans shouldn’t be mad at this because this sudden realization also came with the satisfaction that the ever winning duo that is Belichick and Brady where stopped last night by the New York Giants.  The game was actually really good both teams played well and it was nice to see a franchise team get beat by a team that’s record was about 9 to 7.  As for Eli Manning he is defiently someone who deserves to win the Superbowl.  He no longer follows in his older brothers shadow but cast his own, and leading the Giants to Two Championships that’s going to be a pretty big shadow.  Yes, Sunday was a day of excitment, food, and drinks.  But the Superbowl is more then that many people around the world watch the Superbowl not only for the game or the halftime show. But also for the commercials it seems that this pastime has made another pastime in its wake.  I know a few people who watched this years Superbowl just for the commercials.  Its funny how stuff like that works out its become as much about the tailgating parties,as watching marketers try their best in 30 seconds to make an impression on the viewers.  Most of the time they do a really good job.  Click here to watch top ten Superbowl adds.

Below Is a Picture of Tom Coughlin (Head Coach) and Eli Manning (QuaterBack), with Vince Lombardi Trophy. 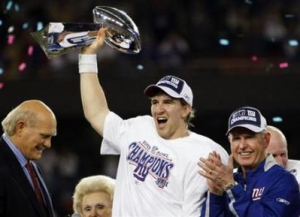